Sixth win at round nine for the Porsche GT Team

With a one-two result at the Virginia International Raceway, Porsche continues its winning streak in the IMSA WeatherTech SportsCar Championship. 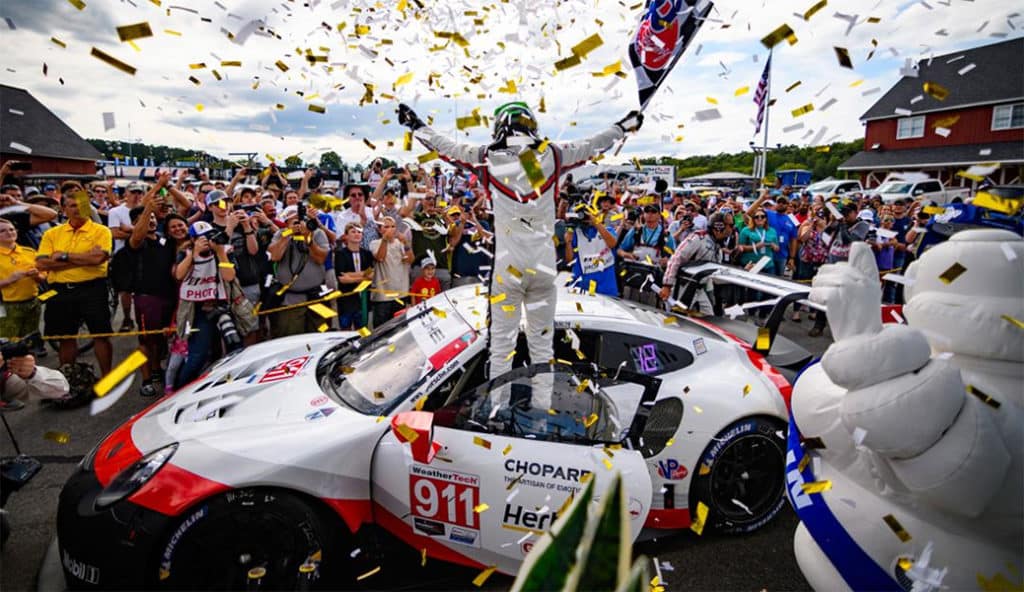 At the third to last race of the season, Patrick Pilet (France) and Nick Tandy (Great Britain) crossed the finish line in the Porsche 911 RSR as the overall winners. Laurens Vanthoor (Belgium) and Earl Bamber (New Zealand) finished second driving the number 912 sister car and, thanks to their victories Long Beach, Mid-Ohio, and Canada’s Bowmanville, continue to hold the lead. The winners of the rounds at Sebring and Watkins Glen, Pilet and Tandy, managed to reduce the gap with their third win to eleven points in the drivers’ classification. In the GTLM class, Porsche also holds a clear lead the manufacturers’ classification with 304 points.

In sunny weather and temperatures of 25 degrees Celsius, starting driver Vanthoor stormed into the lead when the red lights were extinguished. Behind him, Tandy outpaced four opponents on the outside of the track and entered the first corner directly behind Vanthoor. Over the 2:40 hours of the race, there was almost always a Porsche 911 RSR in the lead. The two identical cars implemented different strategies, which enabled Tandy and Pilet to move to the front of the field. Perfect pit stops during the first caution phase contributed to the success, as did a successful restart when the field was released after a second caution phase shortly before the end of the race. Ultimately, Tandy and Pilet came out on top, repeating their 2015 success on the storied race track in Virginia.

Comments on the Race

Steffen Höllwarth (Programme Manager IMSA SportsCar Championship): “I’m incredibly proud of the whole team. What a great team effort. We opted for a good strategy for this circuit, the racetrack suits the Porsche 911 RSR perfectly, and our pit stops were again excellent. We were rewarded for this. Now we’ll enjoy and celebrate our double victory. On Monday, we’ll begin the meticulous work for the last two races of the year.”

Patrick Pilet (Porsche 911 RSR #911): “What a great race! Nick put in a fabulous start and we kept pushing hard over the whole distance. Our strategy worked. We’re delighted with this outstanding result for Porsche, and we’ll do everything to secure the drivers’ title as well.”

Nick Tandy (Porsche 911 RSR #911): “I had a really great start. In the first corner everyone took the inside line. I braked late and managed to make up four positions by taking the outside line. That was the key to success. The car ran beautifully over the entire race weekend and our strategy was super. A great team effort.”

Earl Bamber (Porsche 911 RSR #912): “Everything ran well for us and for Porsche on the whole. Positions one and two is the perfect outcome. In the manufacturer’s classification we only have to start both races to take home overall honours. I’m very pleased with this great result for the team.”

Laurens Vanthoor (Porsche 911 RSR #912): “You can’t do better than a one-two result. It’s a fantastic result for the entire squad. Both Porsche 911 RSR were consistently fast over the whole weekend. Of course, Earl and I would have preferred to stand at the top of the podium, but one can’t really complain about position two.” 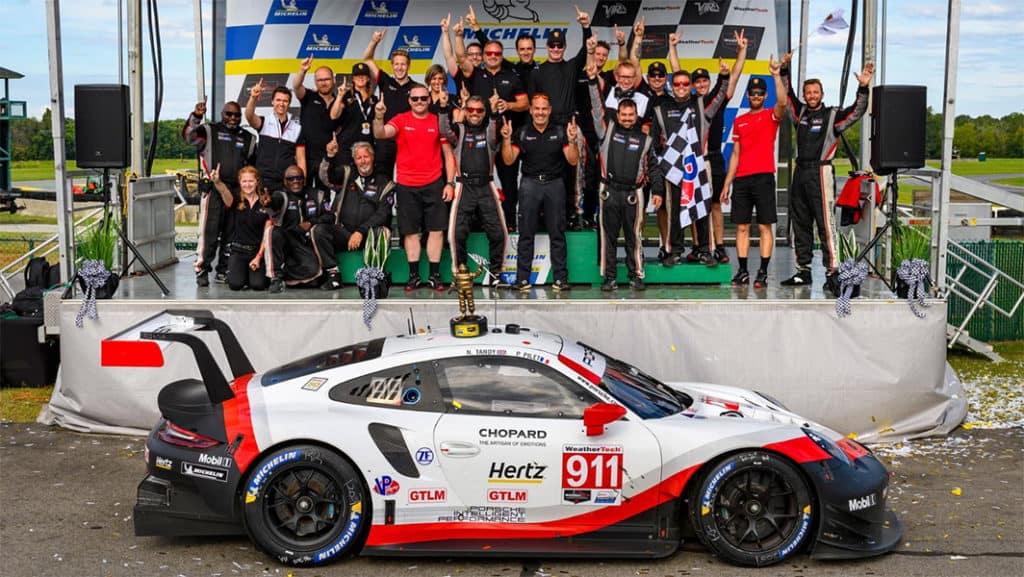 Track conditions proved to be difficult at the qualifying for the ninth round of the IMSA WeatherTech SportsCar Championship. With the surface drying up slowly after a rain shower, the Porsche GT Team claimed the first and sixth spot on the starting grid during the 15-minute qualifying. Laurens Vanthoor (Belgium) lapped the 5.263 kilometre circuit with the ca. 510 hp Porsche 911 RSR in 1:40.630 minutes and secured pole position for the team. Nick Tandy (Great Britain) put the vehicle with starting number 911 on sixth. Vanthoor’s pole position is the fifth for the Porsche GT Team so far this season.

In the closing stages of the qualifying the circuit, which is located near the town of Alton in the US state of Virginia, allowed increasingly fast laps. Vanthoor’s timing proved to be optimal and enabled the Belgian to put in the fastest time with the number 912 vehicle. Tandy was on a fast lap in the sister car when he ran wide on the wet grass and made contact with the tyre stack. The Briton will tackle Sunday’s 2:40 hour race with Patrick Pilet (France) while Vanthoor shares driving duties with Earl Bamber (New Zealand).

Canada’s Zacharie Robichon set a time of 1:45.826 minutes driving a 500+hp Porsche 911 GT3 R in the GTD-class and takes up the race for the Pfaff Motorsports customer team from first place in class. Robichon shares the cockpit with Scott Hargrove (Canada).

Steffen Höllwarth (Programme Manager IMSA SportsCar Championship): “At present the competition in the GTLM class is brutally tough with the margins super tight. There was good and not so good news from this qualifying. The track dried up after a brief shower before the qualifying took off and became faster and faster during the session. Laurens put in a perfect lap at the perfect time. Nick pushed, but then he made a tiny error. Well, this happens. Car number 912 will have a clear track in front of it, for starting number 911 we’ll work out a strategy to get the car to the front during the race. Congratulations to Pfaff Motorsports on the pole with the 911 GT3 R!” 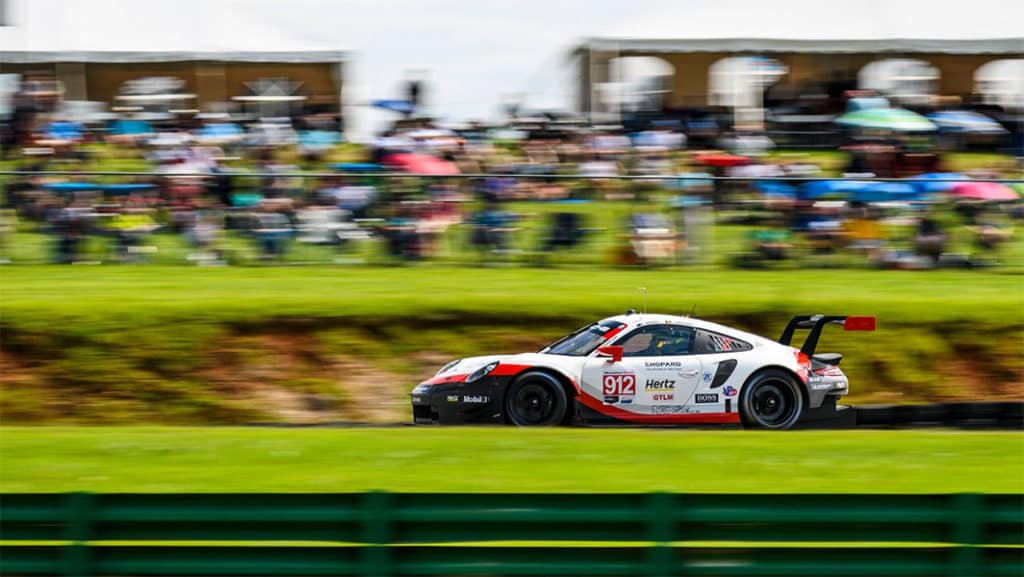 With five victories as well as podium finishes at every IMSA race so far this season, the works driver crews, Earl Bamber (New Zealand) and Laurens Vanthoor (Belgium) in the No. 912 car, as well as Patrick Pilet (France) and Nick Tandy (Great Britain) in the No. 911 vehicle, currently rank first and second respectively in the GTLM class. Porsche leads the manufacturers’ classification with a 21-point advantage.

In addition to the factory squad’s two ca. 510 hp Porsche 911 RSR, the two customer teams Park Place Motorsports and Pfaff Motorsports will field a Porsche 911 GT3 R each in the GTD class at the 2:40-hour race. Like at Lime Rock, no vehicles in the faster DPi and LMP2 prototype categories will compete in Virginia. Thus, the Porsche GT Team will be chasing overall victory on the 5.263-kilometre circuit on Sunday.

The Virginia International Raceway is located near the town of Alton close to the border of the US State of North Carolina. The circuit can look back on an eventful history and has evolved from a straightforward circuit for road vehicles to a modern racetrack resort with hotels and leisure activities. In 1971, Porsche legends Hurley Haywood and Peter Gregg won the inaugural IMSA GT event there at the wheel of a Porsche 914-6 GT. A year later the pair followed up with another victory. Tandy and Pilet pocketed the most recent win there in 2015. Bamber and Jörg Bergmeister rounded off this successful outing with second place.

The winners of the Sebring and Watkins Glen races, Patrick Pilet (France) and Nick Tandy (Great Britain), share the No. 911 Porsche 911 RSR. The pair currently ranks second in the drivers’ classification. Their works driver colleagues in the No. 912 sister car, Earl Bamber (New Zealand) and Laurens Vanthoor (Belgium), lead the class after victories at Long Beach, Mid-Ohio and Bowmanville, Canada.

In the GTD class, two 500+hp Porsche 911 GT3 R will compete. The customer team Pfaff Motorsports (No. 9) tackles the race with Canadians Scott Hargrove and Zacharie Robichon. Porsche works driver Patrick Long (USA) shares the cockpit of the No. 73 vehicle run by Park Place Motorsports with his compatriot Patrick Lindsey. 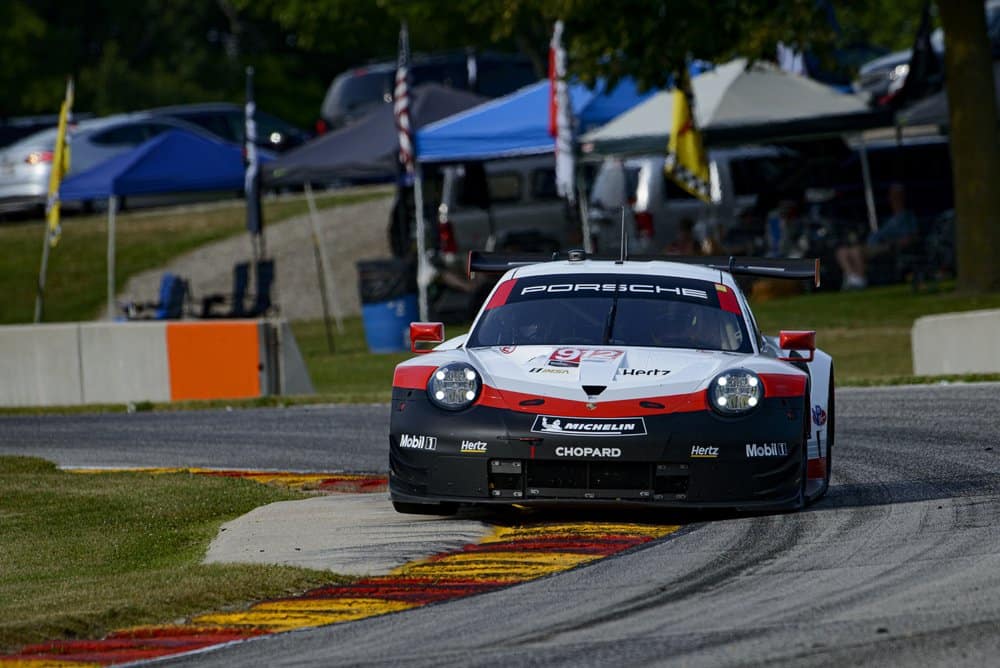 For its third racing season in North America, the Porsche 911 RSR has undergone further optimisation primarily in the suspension setup. Depending on the size of the restrictor, the engine, which is positioned in front of the rear axle, puts out around 375 kW (510 hp). The large rear diffuser combined with a top-mounted rear wing provides aerodynamic efficiency and significant downforce.

The 911 GT3 R fielded by customer teams was newly developed for the 2019 season. Improvements in the areas of aerodynamics and kinematics were systematically implemented from the insights garnered from the many race outings of its predecessor. The six-cylinder engine in the rear of the GT3 racing vehicle produces over 368 kW (500 hp).

About the IMSA SportsCar Championship

The IMSA SportsCar Championship is a sports car race series that has been contested in the USA and Canada since 2014. The series originated from the merger of the American Le Mans Series and the Grand-Am Series. Sports prototypes and sports cars start in four different classes: GTLM (GT Le Mans), GTD (GT Daytona), Dpi (Daytona Prototype international) and LMP2 (Le Mans Prototype 2). The Porsche 911 RSR runs in the GTLM class, and the Porsche 911 GT3 R contests the GTD class.