The Porsche GT Team concluded the IMSA WeatherTech SportsCar Championship season by winning the manufacturer, driver and team titles. At the final round of the season at Road Atlanta, the two Porsche 911 RSR flying the Coca-Cola colours finished on positions five and six. 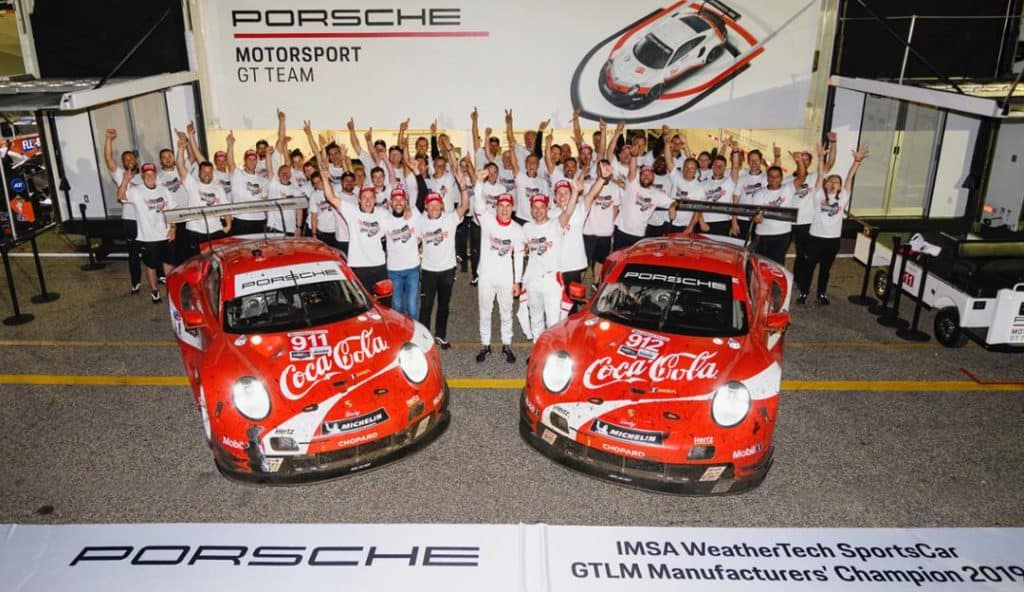 This race marked the 50th and final factory outing for the successful GT vehicle from Stuttgart, which won six of the eleven rounds on the 2019 IMSA calendar. The Porsche works drivers Earl Bamber (New Zealand) and Laurens Vanthoor (Belgium) have been crowned the drivers’ champions, with the team title going to the squad campaigning the No. 912 Porsche 911 RSR. In the GTD class, the Pfaff Motorsports customer team achieved a podium result with the No. 9 Porsche 911 GT3 R.

The ten-hour Petit Le Mans race in the US state of Georgia was distinguished by the constant lapping manoeuvres. With 34 vehicles competing on the 3.6-kilometre circuit, the order was quickly established. When the safety car was deployed for a final time shortly before the finish, the gaps shrunk. In the ensuing 25-minute sprint, Bamber battled valiantly to clinch a podium spot, but was unable to do better than fifth place in the fierce competition of the GTLM class. For the final round of the season, the New Zealander and his Belgian teammate Vanthoor shared driving duties with the Frenchman Mathieu Jaminet in the ca. 510 hp 911 RSR, which is based on the high-performance Porsche 911 GT3 RS* road-going sports car. The No. 911 sister car helmed by Nick Tandy (Great Britain), Patrick Pilet and Frédéric Makowiecki (both France) secured sixth place. Tandy and Pilet concluded the season as runners-up in the drivers’ championship. 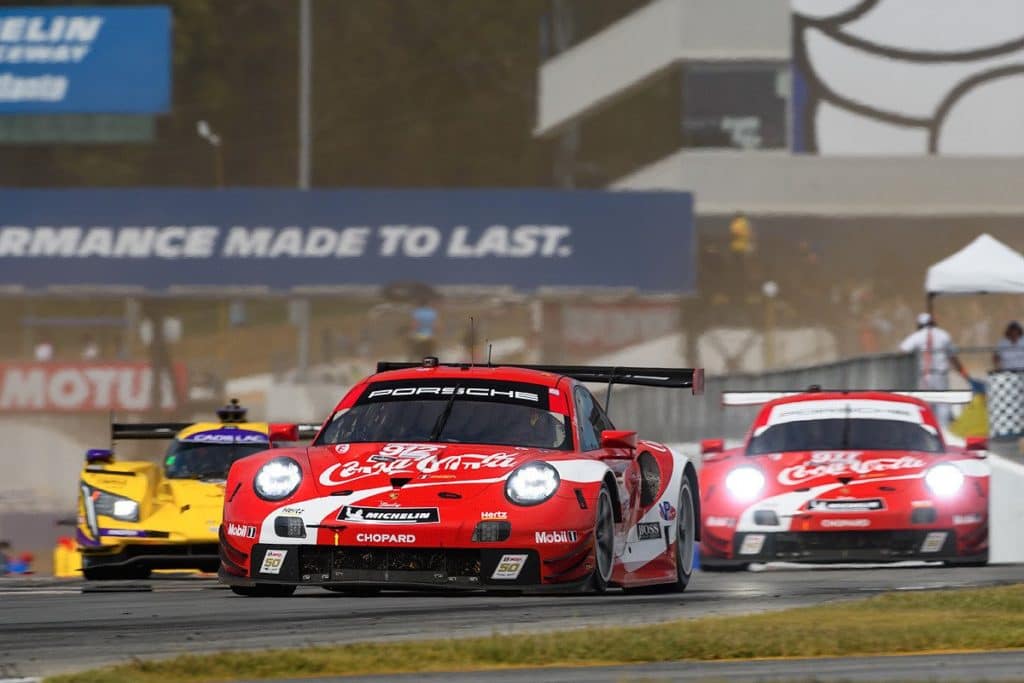 Fritz Enzinger (Vice President Motorsport): “It’s a historic day for Porsche Motorsport. After winning the manufacturers’ and drivers’ world championship titles in the FIA WEC, we’ve now also secured the titles in the 2019 IMSA championship. Thanks to all the drivers and the entire Porsche team for their excellent performances. Our incredible team spirit and the common goal of winning races for Porsche have made this success story possible.”

Pascal Zurlinden (Director Factory Motorsport): “That was definitely not our best race. We made a lot of small mistakes. Still, now it’s time to celebrate. We have every reason to party after winning all titles in the 2019 IMSA series. We’re now the champions of the FIA WEC and in North America – that’s something we can be extremely proud of.”

Steffen Höllwarth (Head of Operations IMSA Championship): “Our competitors were better today. It didn’t go so smoothly for us. But we have our eye on the big picture. We’ve won the manufacturers’ title and claimed positions one and two in the drivers’ and team classifications. All in all, it was a phenomenal season. We’ll enjoy our successes, but we’ll also analyse today’s race.”

Patrick Pilet (Porsche 911 RSR #911): “The race wasn’t easy, because we lacked some speed unfortunately. We don’t yet know the reason for this. Still, it’s a great day for Porsche. Together, we won all the titles. Congratulations to Earl and Laurens on winning the drivers’ championship. I’m now looking forward to the party we’ll have to celebrate being crowned manufacturers’ champions.”

Nick Tandy (Porsche 911 RSR #911): “You can’t win every race. Today wasn’t our day. Still, we achieved our goal of winning the championship. Congratulations to the entire Porsche squad and especially to Earl and Laurens. After a great season, the guys deserve to be champions.”

Frédéric Makowiecki (Porsche 911 RSR #911): “It was a perfect season for Porsche. If you take home all the titles in the enormously competitive GTLM class, then it’s proof of perfect teamwork, strong performances in the cockpit and an extremely competitive car. The Porsche 911 RSR has enabled us to secure many victories. The new 911 RSR has some big shoes to fill next season.”

Earl Bamber (Porsche 911 RSR #912): “The race was simply exhausting because we had to fight over ten hours. Unfortunately we didn’t have the pace to win today. Still, in spite of all the problems, we were within striking distance of the podium until the last lap. And that’s exactly what set us apart in this incredible season. Our perfect teamwork always gave us the opportunity to be right up the front when the going got tough. Now we’ll celebrate our titles.”

Laurens Vanthoor (Porsche 911 RSR #912): “I came to Porsche three years ago. I finally got the chance to drive in the USA. It’s something I’ve always wanted. The IMSA series was completely new territory for me. I had to get used to the racetracks, the processes and the car. Now I’ve won the title with my friend Earl. For me personally, a dream has come true.”

Mathieu Jaminet (Porsche 911 RSR #912): “That was a tough race. In the high temperatures in the first half of the race we weren’t fast enough. Only when the sun went down were we able to utilise the full potential of our Porsche 911 RSR. We fought to the last second, but it wasn’t enough. Still, the most important thing was to win the title – and that’s what we did. I’m proud to have contributed to this.”

Regular drivers Patrick Pilet (France) and Nick Tandy (Great Britain) join forces with their works driver teammate Frédéric Makowiecki in the No. 911 Porsche 911 RSR. This trio won at Road Atlanta in 2018 as well as at Sebring and Watkins Glen in 2019. Pilet and Tandy currently rank second in the drivers’ classification. Their works driver colleagues in the No. 912 sister car, Earl Bamber (New Zealand) and Laurens Vanthoor (Belgium), lead the class with a twelve-point advantage after victories at Long Beach, Mid-Ohio and Bowmanville, Canada. The pair shares driving duties in the ca. 510 hp 911 RSR with Porsche Young Professional Mathieu Jaminet (France). 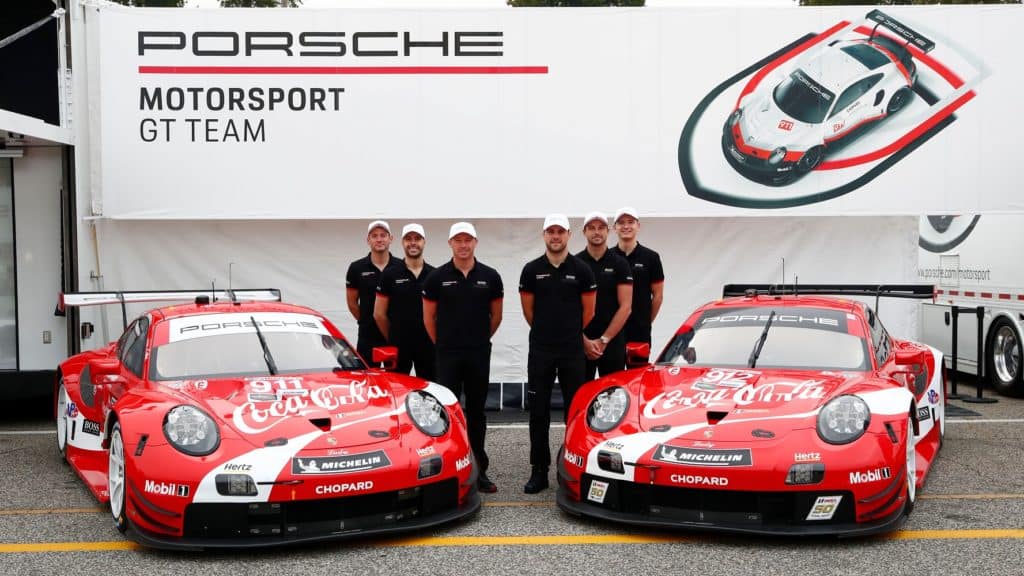 In the GTD class, the customer squad Pfaff Motorsports again relies on the services of Porsche development driver Lars Kern (Weissach) for the ten-hour finale. The seasoned German is joined in the cockpit of the No. 9 Porsche 911 GT3 R by the two Canadians Zacharie Robichon and Scott Hargrove. Robichon took home an early title in the Sprint Cup at the previous IMSA round at Laguna Seca (USA). The Porsche 911 GT3 R fielded by the Canadian team will contest the event decked out in a special blue livery.

The Porsche 911 RSR, which is based on the high-performance 911 GT3 RS road-going sports car, has undergone further optimisation primarily in the suspension setup for its third racing season in North America. Depending on the size of the restrictor, the engine, which is positioned in front of the rear axle, puts out around 375 kW. The large rear diffuser combined with a top-mounted rear wing provides aerodynamic efficiency and significant downforce. The race at Road Atlanta marks the last factory outing for the 2017-spec vehicle. In the World Sports Car Championship, the switch to the ca. 515 hp successor took place in August. 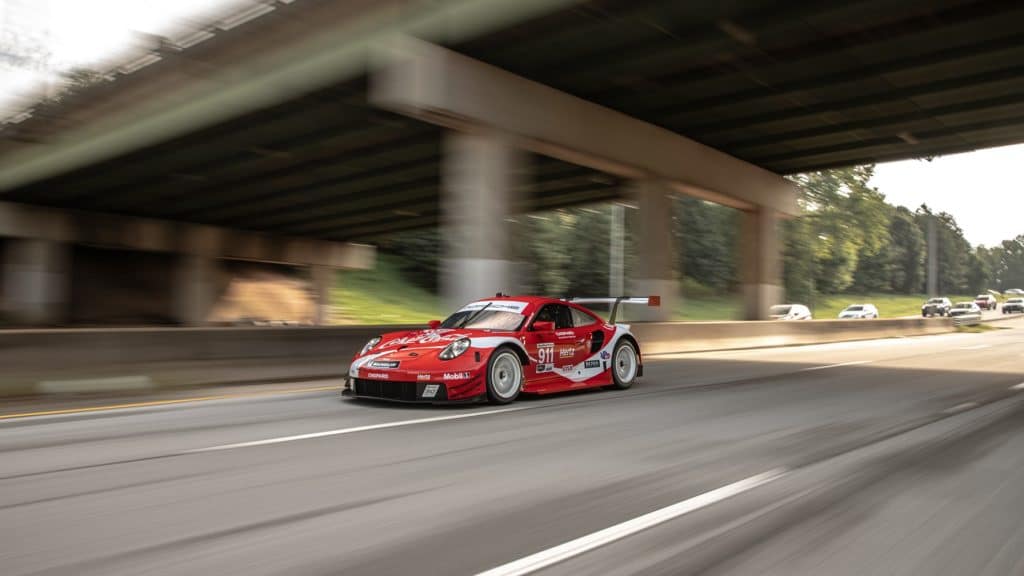 The 911 GT3 R fielded by Porsche customer teams was newly developed for the 2019 season and is also based on the road-legal 911 GT3 RS*. Improvements in the areas of aerodynamics and kinematics were systematically implemented from the insights garnered from the many race outings of its predecessor. The six-cylinder engine in the rear of the GT3 racing vehicle produces over 368 kW.

The ten-hour race on the 4.088-kilometre circuit in the US state of Georgia marks the conclusion of the 2019 IMSA season. The storied racetrack on the outskirts of the metropolis of Atlanta – the home of Porsche North America and the Coca-Cola beverage company – is a favourite amongst drivers. The so-called “Esses” (turns two to five) are particularly challenging for the drivers. Courage and utmost precision combined with a perfect car setup are required through this high-speed passage. In 21 years, Porsche has notched up a total of 20 class wins at Petit Le Mans. In 2015, the Weissach factory squad even beat all prototypes in the rain to score overall victory. In 2018, Porsche claimed victory in the fiercely competitive GTLM class flying the historic colours of Mobil 1. Petit Le Mans is also the final round of the IMSA Michelin Endurance Cup (IMEC). In this competition, which includes the endurance races at Daytona, Sebring, Watkins Glen and Road Atlanta, the Porsche GT Team currently ranks first and second after two victories.