The Porsche GT Team has achieved maximum success at its final outing in the GTLM class of the IMSA WeatherTech SportsCar Championship. 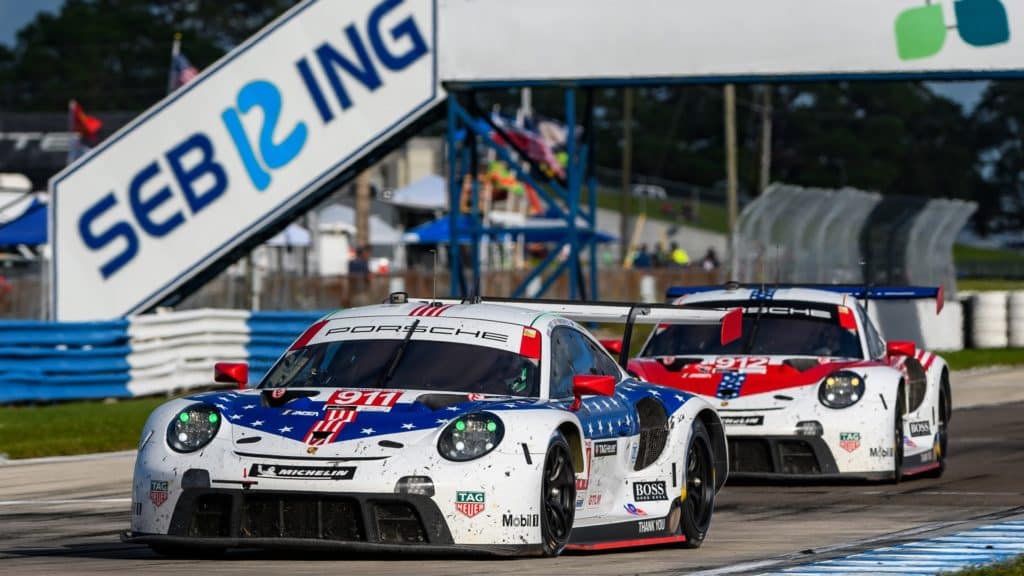 In the highly dramatic twelve-hour race in Sebring, Britain’s Nick Tandy, Frédéric Makowiecki from France and Earl Bamber scored a victory with the No. 911 Porsche 911 RSR. The New Zealander celebrated twice after also clinching second place in the No. 912 car, which he shared with his teammates Laurens Vanthoor from Belgium and Neel Jani from Switzerland. After contesting a total of 75 races since 2014, the North American Porsche works team has achieved 21 wins and 56 podium results. In the GTD class, the customer team Wright Motorsports took first place with the Porsche 911 GT3 R.

Pascal Zurlinden (Director Factory Motorsport): “That’s just crazy. There’s no better way to wrap up a factory programme. At the end of our IMSA campaign, we secured three wins in a row at Road Atlanta, Laguna Seca and now Sebring. That’s phenomenal. Congratulations as well to our customer squad Wright Motorsports. And let’s not forget our one-two success today at the WEC in Bahrain. There, too, we managed to celebrate another class win with a customer team. It was an incredibly successful day for Porsche Motorsport.”

In an eventful twelve-hour race in Florida, the decision in the GTLM class went down to the wire to the final 15 minutes of the race. After the last of nine safety car phases, Tandy had manoeuvred himself into the slipstream of the leading BMW. Shortly after the last restart, the frontrunner sustained tyre damage in the aftermath of a collision between several GTD vehicles. Tandy snatched the lead in his Porsche 911 RSR and held tight to his front spot to the flag. For the British racer and his teammate Makowiecki, this was the third victory in a row at the esteemed Sebring endurance classic. Bamber, who drove stints in both works cars at the season finale of the North American sports car racing series, crossed the finish line in second place, just 9.025 seconds behind. The Porsche factory squad concluded the last season with the 911 RSR in the GTLM class ranking third in the championship.

Huge celebrations as well in the pits of the Porsche customer team Wright Motorsports. Works driver Patrick Long, his American compatriot Ryan Hardwick and Belgium’s Jan Heylen brought the 911 GT3 R with the starting number 16 over the finish line in first place. Despite the lack of grip at times and an unplanned change of the brakes, the strong trio maintained their composure in the fierce competition of the GTD class. The customer team from the US state of Ohio wrapped up the championship in second place, just two points shy of the title.

Shortly before the race, the works team bid the loyal fans of the Porsche 911 RSR farewell with a special spectacle. Five GTLM vehicles of the 2016, 2018, 2019 and 2020 generations turned three parade laps on the legendary circuit in Florida decked out in the much-loved liveries of Brumos, Mobil1, Coca-Cola and the special “Thank You” farewell wrap. To the delight of spectators, the drivers Laurens Vanthoor, Frédéric Makowiecki, Patrick Long, Jonathan Benett and Cooper MacNeil performed wheel spins and let the engines roar. On Wednesday evening, Pascal Zurlinden (Director Factory Motorsport) and Head of Operations Steffen Höllwarth thanked all employees of the Core Autosport squad at an emotional team event.

Comments on The Race

Steffen Höllwarth (Head of Operations IMSA Championship): “I’m incredibly proud of the team. This weekend wasn’t easy for us. Because of the upcoming farewell, the mood was different than usual, but everyone coped just fine. We weren’t the fastest in the field, but we were the ones who made the least mistakes – and that’s how things like this happen. Suddenly you find yourself at the front. After three straight wins at Sebring, I’d say that this track has become our turf. Now it’s time to celebrate!”

Frédéric Makowiecki (Porsche 911 RSR #911): “I can’t believe it! This is the third win in a row for Nick and me at this 12-hour classic. It’s a very special and unforgettable achievement. We may not have been the fastest today, but at such moments, that’s precisely the time to throw our hat into the ring. We worked flawlessly, the crew did a perfect job and as such we virtually forced our luck. I’m over the moon.”

Nick Tandy (Porsche 911 RSR #911): “Our third straight win at Sebring, plus a double victory for Porsche – at the last outing of our works team no less! It doesn’t get better than that! Despite all the rejoicing, I feel very sad at the same time. We’ve scored so many incredible victories over the past few years and I’ve grown very close to the team. We’ll party hard tonight – so hard, in fact, that unfortunately we’ll have to postpone the loading of equipment into the trucks until tomorrow.”

Earl Bamber (Porsche 911 RSR #911/#912): “It feels somehow very strange to be called on to the podium as the winner and runner up at the same time. You don’t get that every day. I contributed only in a minor way to the victory of number 911 car, my main task was to do the stints in ‘my’ number 912 car. Our 911 RSR could never match the pace of the sister car, but we still didn’t give up. A one-two at the finale – there’s no better way to bid farewell to a racing series. It’ll remain in our memories forever.”

Results of the Race 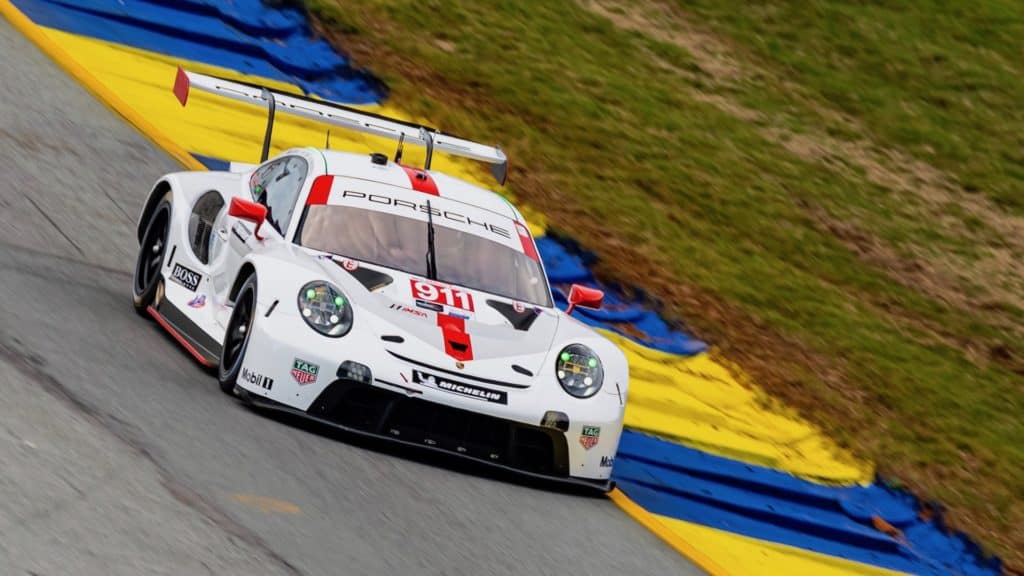 The Porsche customer team Wright Motorsports has secured pole position in the GTD class for the twelve-hour race at Sebring. The squad from the US state of Ohio has laid excellent foundations in the open fight for the championship title. Heading to the finale of the IMSA WeatherTech SportsCar Championship, the gap to the top in the overall classification is just seven points. In the faster GTLM category, the two Porsche 911 RSR fielded by the factory team start from positions five and six.

With an overcast sky and an air temperature of around 25 degrees Celsius, Nick Tandy from Great Britain at the wheel of the No. 911 car and Swiss racer Neel Jani in the No. 912 sister car went out on the track at the start of the session. The 36-year-old from Bedford and IMSA series record-holder with nine pole positions improved significantly in the first four laps but was ultimately unable to make any decisive ground due to deteriorating tyres. Jani, who experienced his first-ever qualifying session in the Porsche 911 RSR, clocked increasingly faster times on his nine laps, but was also unable to close the gap to the leader. After strong drives in the three free practice sessions on Thursday with regular stints at the front, Friday’s qualifying proved disappointing for Porsche. The factory squad contesting the North American sports car racing series tackles the hotly contested GTLM class on Saturday for the last time with the 911 RSR. Both vehicles are decked out in an adaption of the American national flag. Emblazoned in large letters on the underside of the rear wing is the sentiment “Thank You”.

In the GTD category, the Porsche 911 GT3 R fielded by the customer squad Wright Motorsports will start from pole position. During qualifying, Jan Heylen lapped the Sebring International Raceway in a time of 2:00.844 minutes and clearly eclipsed the competition. At the end of the session, the experienced Belgian held a lead over the second-placed car of seven-tenths of a second. For the race, Heylen shares the cockpit of the GT3 racer from Weissach with Porsche works driver Patrick Long from the USA and his American compatriot Ryan Hardwick. Wright Motorsports currently ranks second in the overall GTD category and still has a chance to claim the championship title at the finale in Florida. 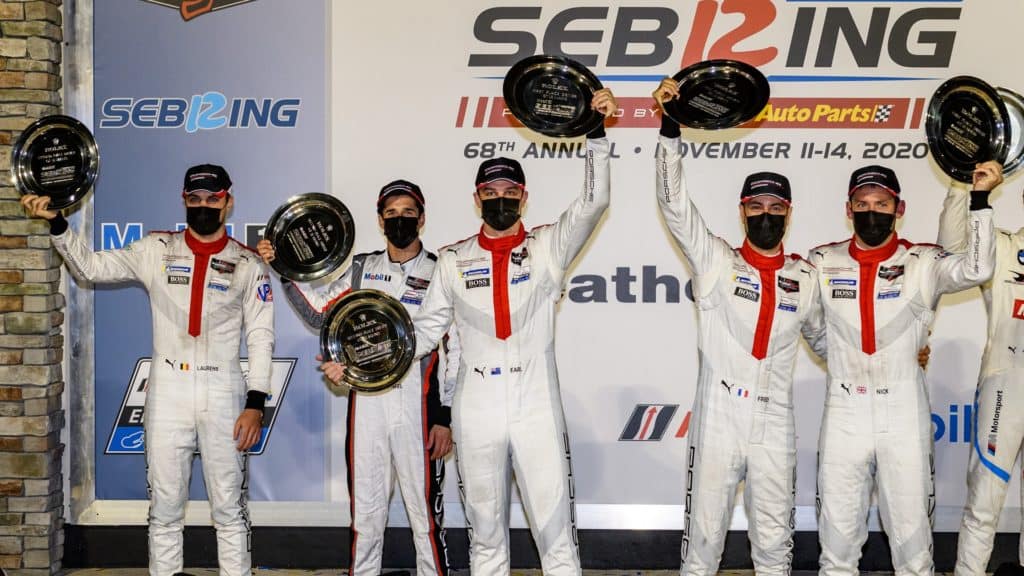 The regular drivers Nick Tandy from Great Britain and Frenchman Frédéric Makowiecki share driving duties in the No. 911 Porsche 911 RSR. The pair was part of the winning crew at Sebring in 2018 and 2019. Porsche has announced Earl Bamber from New Zealand as the third driver. The two reigning GTLM driver champions Earl Bamber and Belgium’s Laurens Vanthoor join forces with Neel Jani in the cockpit of the identical No. 912 sister car. The 36-year-old WEC champion and 2016 Le Mans makes his race debut at the wheel of the 911 RSR after many kilometres of testing. Bamber and Vanthoor recently won the Laguna Seca race. The pair ranks sixth in the drivers’ classification, one position behind Tandy and Makowiecki. In the manufacturer’s championship, Porsche heads to the final round of the season in third place. In the IMSA Michelin Endurance Cup – a special classification which includes the four longest races of the season – the Porsche GT Team currently ranks second and has good chances of winning the title.

In the GTD class, a category for racing cars complying with the FIA GT3 regulations, Wright Motorsports fields a Porsche 911 GT3 R. The American works driver Patrick Long joins forces with his compatriot Ryan Hardwick and Belgium’s Jan Heylen in the cockpit of the No. 16 car. The squad from the US state of Ohio is still in the running to claim the GTD-class title. Wright Motorsports travels to the final round ranking second in the team classification, seven points shy of the leader. 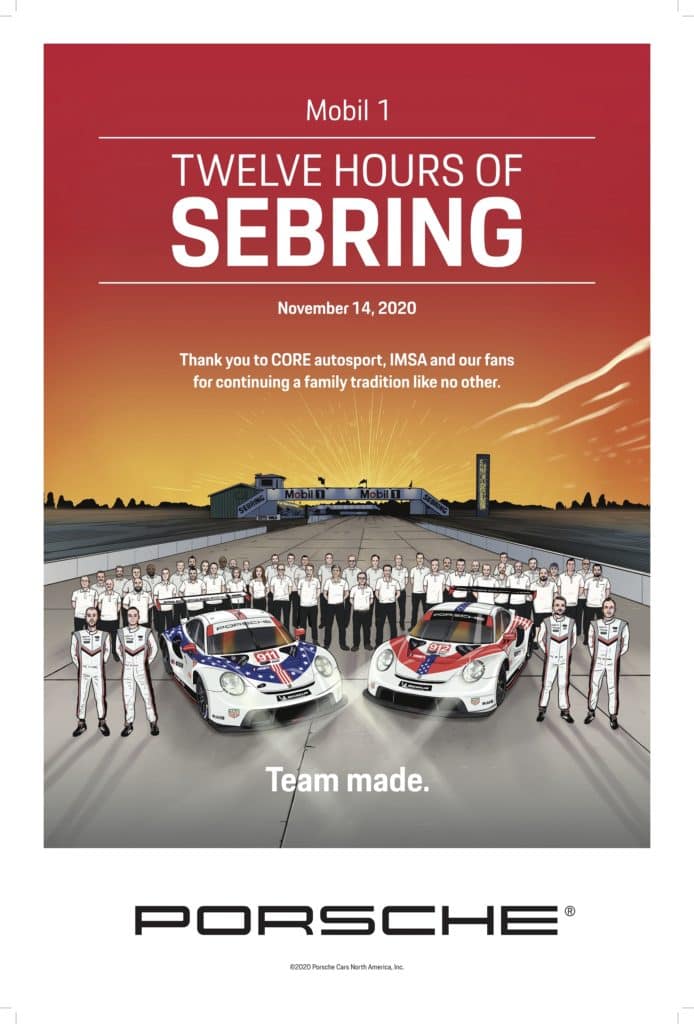 Successes of the Porsche 911 RSR in the IMSA Championship

Since the start of the factory campaign with the Porsche 911 RSR in the hotly contested GTLM class of the IMSA series in 2014, the sports car manufacturer from Weissach has won the manufacturer’s title three times and the team championship twice. From 74 races over seven years, Porsche has achieved 20 wins, 20 pole positions and 55 podium finishes. The greatest highlight is the overall victory of the 911 RSR at the 2015 Petit Le Mans: In a spectacular race in the rain at Road Atlanta, the works drivers Nick Tandy, Patrick Pilet and Richard Lietz outpaced the entire field, including the faster prototypes. Britain’s Nick Tandy tops the list of statistics as the most successful driver in the North American Porsche factory squad. With nine pole positions to his credit, the outright Le Mans winner from 2015 has set a record in the IMSA series.

About the IMSA SportsCar Championship

The IMSA SportsCar Championship was founded in the USA and Canada in 2013 after the merger of the American Le Mans Series and the Grand-Am Series. A year later the new sports car race series, which is organised by the International Motor Sports Association (IMSA), was contested for the first time. Sports prototypes and sports cars start in four different classes: GTLM (GT Le Mans), GTD (GT Daytona), Dpi (Daytona Prototype international) and LMP2 (Le Mans Prototype 2). The new Porsche 911 RSR is fielded in the GTLM class, and the Porsche 911 GT3 R contests the GTD class.