The new 911 RSR (2019 model year) has secured a double victory at its race debut. At the season-opening round of the FIA World Endurance Championship at Silverstone (Great Britain), Gianmaria Bruni and Richard Lietz crossed the finish line first in the No. 91 car. The reigning world champions Michael Christensen and Kévin Estre claimed second place in the No. 92 sister car. 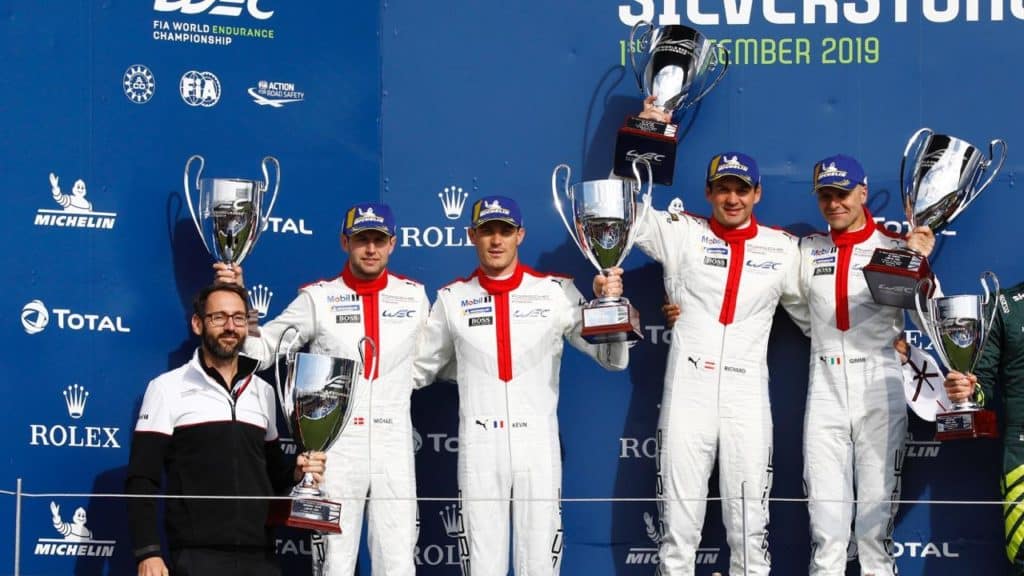 A perfect tactic from the world champion team, strong driving performances, swift pit stops, and a reliable and fast car in both dry and the wet conditions were the key factors for this double win.

After a mediocre qualifying performance, the two Porsche 911 RSR run by the factory squad took up the four-hour race from positions four and six on the grid. In sunny conditions in the early phase, the two new GTE racers from Weissach initially made up very little ground. A heavy shower after around 90 minutes of racing changed the situation significantly. In contrast to the rivals, the Porsche GT Team opted for rain tyres – an ideal choice. The drivers made perfect use of the improved tyre grip on the wet track and managed to pull well clear of the field in the new 911 RSR, which is based on the high-performance 911 GT3 RS*. This impressive margin, however, disappeared when the safety car was deployed after two hours of racing. In the remaining 120 minutes, the drivers staved off attacks from the competition on a drying track and crossed the finish line in first and second place, separated by 3.802 seconds. 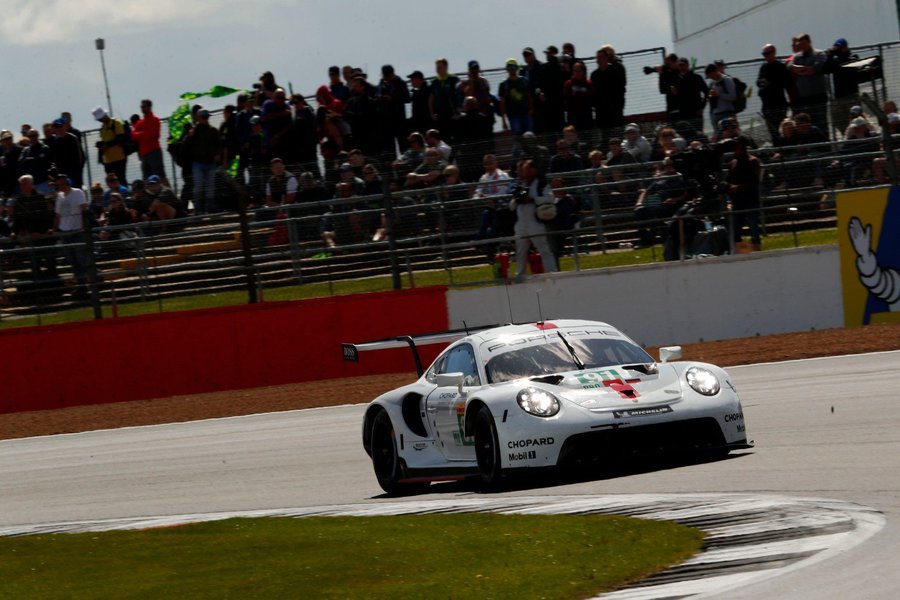 In the GTE-Am class, the best-placed Porsche 911 RSR (last year’s model) achieved fourth place. Right up until the final pit stop, the all-British driver line-up of Michael Wainwright, Ben Barker and Andrew Watson were on course for a podium result in the No. 86 vehicle fielded by Gulf Racing. Fifth place went to the No. 77 car run by Dempsey-Proton Racing with Porsche Young Professional Matt Campbell (Australia), Christian Ried (Germany) and Riccardo Pera (Italy). The sister car with the starting number 88, in which Porsche Young Professional Thomas Preining (Austria) had his first outing, finished on eleventh. The two Porsche 911 RSR campaigned by Project 1 yielded positions six (No. 56) and ten (No. 57).

After the double victory at the opening round of the 2019/2020 season, Porsche leads all categories of the GTE-Pro class. Next up on the calendar is the race in Fuji (Japan) on 6 October.

Comments on the race

Fritz Enzinger (Vice President Motorsport): “At its race premiere, the new Porsche 911 RSR clearly exceeded our expectations. Congratulations to the drivers and the team for a perfect performance at Silverstone. This great success was only possible because the entire Porsche Motorsport team did such excellent work. Many thanks to everyone who contributed to this project and made the new car into a winner.”

Pascal Zurlinden (Director Factory Motorsport): “What a fantastic weekend. Our customer team Proton Racing won the ELMS on Saturday, and a day later we achieve a one-two with the new Porsche 911 RSR in the world championship – it doesn’t get better than that. A huge thank you to our team at the racetrack and to everyone at the Weissach Motorsport Centre. The hard work of the last few months has paid off.”

Jeromy Moore (Technical Project Manager Porsche 911 RSR): “A double victory at the first race – the debut of a racing car can’t get better than that. I think our new Porsche 911 RSR has clearly underlined its qualities right off the bat. I thoroughly enjoyed the race, especially the final result. I’m sure that all the development engineers in my team who followed the race from Germany felt the same way.”

Alexander Stehlig (Head of Operations FIA WEC): “It’s incredible. We travelled to Silverstone with the goal of achieving a solid result at the maiden race of the new Porsche 911 RSR. And we picked up exactly where we left off last season. Perfect teamwork, strong performances in the cockpit and a fast racing car – these factors enabled us to bring home this double victory. A dream has come true for us.”

Gianmaria Bruni (Porsche 911 RSR #91): “Our team opted for the ideal tactic. I was in first place after our pit stop and had a clear run. This enabled me to build a decisive lead, which we maintained to the flag. A debut of a new racing car can’t be better. I’m proud to be part of this incredible team.”

Richard Lietz (Porsche 911 RSR #91): “We spent a year developing the new car and couldn’t wait for the first race outing. To promptly win the race is perfect. We made this achievement possible through perfect tactics. There is still a lot to learn with our new Porsche 911 RSR. At the next round we want to perform even stronger in the qualifying.”

Kévin Estre (Porsche 911 RSR #92): “It was a great race with many duels and plenty of action on the track. That was great fun. It’s a pity for us that we narrowly missed out on winning, but for Porsche it was a perfect start to the new season.”

Michael Christensen (Porsche 911 RSR #92): “Our car was fast over the entire race. Unfortunately it wasn’t quite enough to win. Perhaps we lost crucial time at the last pit stop. We’ll now have to take a close look at that.”

The new Porsche 911 RSR will start its racing debut from the second grid row. In qualifying for the season-opening round of the FIA World Endurance Championship at Silverstone, the Italian Gianmaria Bruni and his Austrian works driver teammate Richard Lietz planted the No. 91 car on fourth place. The reigning world champions Kévin Estre from France and Michael Christensen from Denmark claimed the sixth grid spot in the sister car with the starting number 92.

Between the third free practice in the morning and the qualifying session at midday, the track conditions at the British Formula 1 circuit had changed significantly. The two new Porsche 911 RSR, which had performed impressively in the first session of the day, were not ideally setup for the different conditions. Bruni spun early in his second flying lap. A subsequent tyre defect damaged the front of the No. 91 vehicle. The mechanics repaired the vehicle in record time so that teammate Lietz could clock a good lap time to secure fourth place. Christensen and Estre veered from the ideal line several times during their hot laps due to a less than optimal vehicle balance. Under these circumstances, more than sixth place on the grid was not possible.

In the GTE-Am class, Porsche Young Professional Matteo Cairoli (Italy) and Egidio Perfetti (Norway) turned the second quickest time in the Porsche 911 RSR from last year. The pair share the cockpit of the No. 56 car fielded by the Project 1 squad for the four-hour race on Sunday (start at 1pm CEST) with Germany’s David Kolkmann.

Pascal Zurlinden (Director Factory Motorsport): “The qualifying didn’t go quite as we’d anticipated. The cars weren’t as well balanced as they had been in the previous practices, which resulted in our drivers making several mistakes. A lot is possible from positions four and six. We’re heading into the race feeling optimistic, because our new car has clearly underlined its qualities during practice with excellent consistency and fast lap times. Apart from the qualifying, our debut weekend has gone very well so far. I hope this continues in the race.”

Alexander Stehlig (Head of Operations FIA WEC): “Our drivers were extremely pleased with the vehicle handling in the practice sessions. Unfortunately, it wasn’t quite right in the qualifying. The balance and the tyre pressure were not within the perfect window. That’s why we’re not on the starting positions we’d aimed for. We’ll now analyse the data closely and draw our conclusions for Sunday. We’ll go all-out in the race and underline the strengths of our new car.”

Gianmaria Bruni (Porsche 911 RSR #91): “After my first fast lap I wanted to really go for it on the second lap. Then, as if out of nowhere, I spun in the second corner – in a spot where we hardly steer and never had problems. The spin caused a tyre problem, which then damaged part of the front. Our crew did a first-class job in repairing it quickly. Richard managed to turn a good lap and kept us on fourth place.”

Richard Lietz (Porsche 911 RSR #91): “We experienced a lot in the short qualifying: spin, tyre defect, damage to the front. That was really intense. I was able to turn my laps normally after the repairs. Ultimately, fourth place was possible – a position that is absolutely fine for the first outing of the new Porsche 911 RSR.”

The new Porsche 911 RSR celebrates its race debut at the season-opening round of the FIA World Endurance Championship (WEC). The first race of the 2019/2020 season will be held on the weekend of 30 August to 1 September at the Formula 1 racetrack at Silverstone (Great Britain). The Porsche GT Team, which tackles the FIA WEC as the reigning manufacturers’ world champion, fields two sports cars from Weissach in the race over four hours. In the GTE-Am category, the customer teams Project 1, Gulf Racing and Dempsey Proton Racing campaign a total of five of last year’s Porsche 911 RSR models.

For the first time, the FIA WEC season kicks off in summer. The first round at Silverstone offers another speciality: The Sports Car World Endurance Championship deviates from its standard format of the past with six-hour races. The duration of the race in Great Britain will now be four hours. The storied circuit in the British Midlands, with its legendary passages such as Copse, Stowe and Becketts, poses big challenges for drivers, engineers and teams. Moreover, rain can always be expected in the British Isles, even in late summer. In the past two seasons, the Porsche GT Team has achieved a podium result at Silverstone in the fiercely contested GTE-Pro class.

Austria’s Richard Lietz and Gianmaria Bruni from Italy tackle the race in the No. 91 Porsche 911 RSR. The second Porsche 911 RSR (No. 92) is shared by the drivers’ world champions Kévin Estre (France) and Michael Christensen (Denmark). After winning all world titles in the 2018/2019 Super Season, the driver combinations in the two factory cars remains unchanged for the upcoming season.

The all-British driver line-up of Ben Barker, Andrew Watson and Michael Wainwright will drive the ca. 510 hp No. 86 racer run by the customer team Gulf Racing. Manning the two vehicles fielded by the German squad Dempsey-Proton Racing (#77 and #88) are the two Porsche Young Professionals Matt Campbell (Australia) and Thomas Preining (Austria) as well as team owner Christian Ried (Germany) and the Italian Riccardo Pera. With five Porsche 911 RSR, the sports car manufacturer from Stuttgart is represented by the largest contingent in the GTE-Am category.

The new Porsche 911 RSR (2019 model year) contests its maiden race at the season-opening round of the FIA WEC in Silverstone. The vehicle from Weissach, which produces around 515 hp depending on the air restrictor, was launched on the occasion of the Goodwood Festival of Speed (Great Britain) in July 2019. Compared to its extremely successful predecessor model, the car for the GTE-Pro class of the FIA WEC received improvements to areas such as driveability, efficiency, ergonomics and serviceability. About 95 percent of the car is new. The 911 RSR is powered by a 4.2-litre, six-cylinder boxer engine.